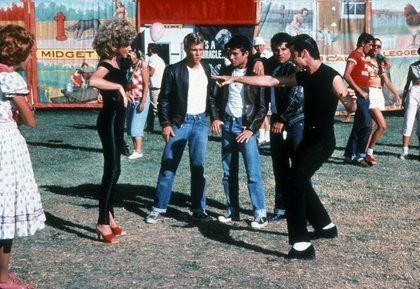 Whenever you think of the quintessential teen romance flick of old, this movie usually comes to mind! Experience the friendships, romances and adventures of a group of high school kids in the 1950s. Welcome to the singing and dancing world of “Grease,” the most successful movie musical of all time. A wholesome exchange student and a leather-clad Danny  have a summer romance, but will it cross clique lines? The film stars John Travolta as Danny, Olivia Newton-John as Sandy, and Stockard Channing as Betty Rizzo, the leader of the Pink Ladies. Both Sandy and Danny make for an electric pair with one being a good girl and the other being a lazy greaser; which causes them to switch identities later in the movie to please each other in the movie’s most iconic scene. The other couple in the movie Kenickie and Rizzo are also just as iconic. The movie features a ton of timeless memorable songs including “Grease”, “Summer Nights”, “Look at Me, I’m Sandra Dee”, “Hopelessly Devoted to You” (the well deserved Oscar-nominated song, which lost), “Greased Lightnin”, “Beauty School Dropout”, “Sandy”, “There Are Worse Things I Could Do”, “You’re the One That I Want” and of coarse “We Go Together”. To this day I never questioned the logic of Sandy and Danny departing in Greased Lightnin’, which takes flight, but hey this movie was made in the 70’s after all and will always be together. Overall if there was one teen musical that I would watch again and again never getting tired of it, it would have to be this one thanks to all the show-stopping musical numbers and memorable cast of 1950’s teenagers played by 20-30 year old actors (especially Olivia Newton-John and Stockard Channing)!