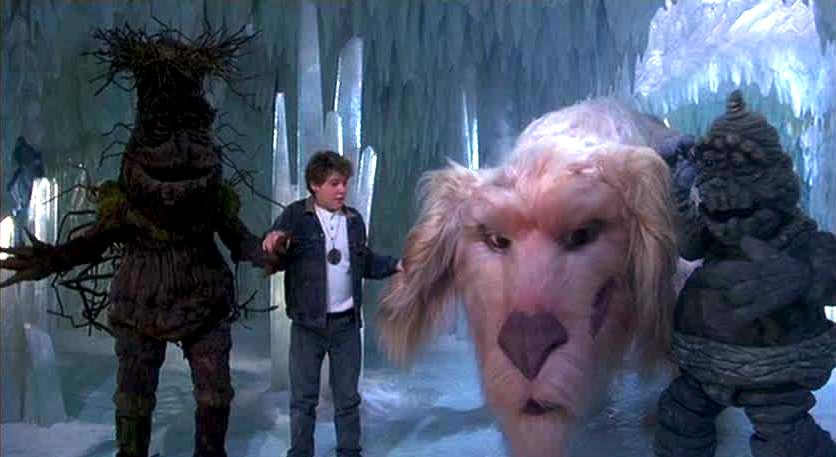 If you thought the last adventure in “The NeverEnding Story” was terrible, you ain’t seen nothing yet in what could be described as “Bastian Goes to High School”! After his father remarries, Bastian has trouble dealing with hostile stepsister Nicole. At school, Bastian is bullied by Skip and his pals. Retreating to the library, he runs into old Mr. Coreander  and again starts reading “The Neverending Story,” the book that transports him to Fantasia. Trouble ensues when Skip finds the volume and begins destroying the fantasy kingdom, forcing Bastian to return to the real world to stop him. It starred Jason James Richter as Bastian Balthazar Bux, and Jack Black in one of his early roles as the school bully, Slip. Basically like “Jurassic Park III”, this third outing is an original story that didn’t exist in the novels; which makes the movie so much worse. The new kid who plays Bastian is even worse then before (they even make a semi-meta joke on how he’s been recast three times). The Childlike Empress doesn’t make much of an impression. Instead of another mystical force, this time the main antagonists are a group of high school bullies called “The Nasties”; how lazy can you possibly get? To the movie’s credit Jack Black is probably the only interesting thing in this whole movie and the only actor who seems to be invested. They also ruined beloved literary characters such as turning Falkor into a bumbling moron and turning Rockbiter into a sitcom (he has a wife and kid) along with singing “Born To Be Wild” (I wish I was making all this up!). Overall this third installment is a huge slap in the face to this beloved fantasy series, which doesn’t even feature the memorable soundtrack song “The NeverEnding Story”!