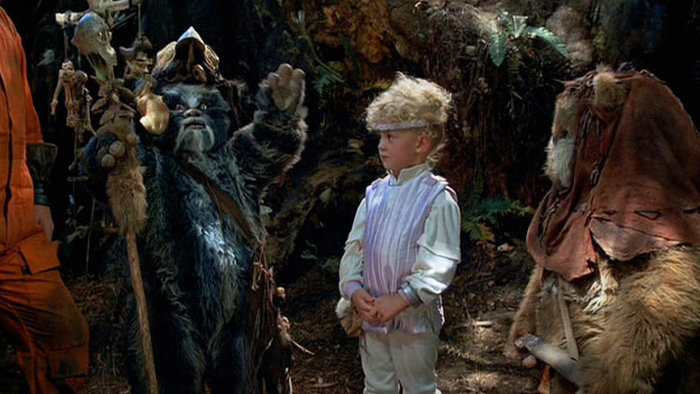 Despite the fact that the Ewoks were considered to be the worst aspects from “The Return of the Jedi”, they somehow got two that’s right two TV Movies that are set before the events of that film, but there are some Star Wars fans out there gave the species a cult following over the years, now lets review this! When a family’s spacecraft crashes on the forest moon of planet Endor, teenage son Mace (Eric Walker) and his little sister, Cindel (Aubree Miller), find themselves separated from their parents. Soon these lost children encounter the Ewoks, the small and furry warriors who call the moon home. With the help of these adorable yet fearless natives, brother and sister set out on a quest to rescue their parents from the grip of a vicious monster known as the Gorax. The human leads in the movie can come off as annoying at times, especially Mace who has the charisma of Mark Hamill and the acting chops of Hayden Christensen. But I did at least found an attachment to the adorable Cindel (who would later be the main character of the second installment). But I couldn’t help buy find the idea of Wicket the Ewok speaking English to be downright cringe-worthy, especially compared to “The Return of the Jedi”. Not the worse Stat Wars TV Movie, I’ve ever seen in my lifetime, but one I wouldn’t be revisiting anytime soon!