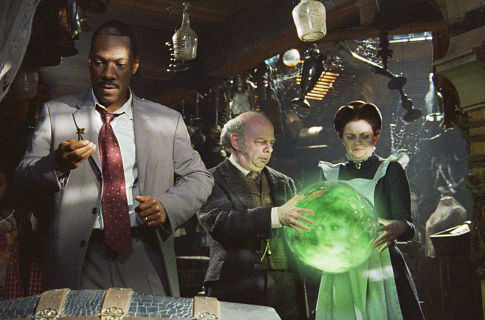 Another movie based off of a Disney Theme Park Ride as well as another 2000’s Eddie Murphy flick you know is gonna suck! Workaholic real estate agent Jim Evers (Eddie Murphy) is accused by his wife, Sara (Marsha Thomason), of neglecting his son (Marc John Jefferies) and daughter (Aree Davis), so he takes the family on a vacation. Along the way, the family stops off at a sinister mansion that Jim has been asked to sell, only to discover it’s haunted by Master Gracey (Nathaniel Parker) ; his stern butler, Ramsley (Terence Stamp) ; and two other servants who need some help breaking a curse. After watching the movie again recently, yeah its not as good as I remembered. The movie is neither scary or funny, although I still get some chuckles out of it at least even if its mostly for pity. The movie was made during the time Eddie Murphy’s popularity was starting to dwindle at bit and you can definitely see that displayed here. I do at least relate to the son for having a fear of spiders, so there’s that at least!