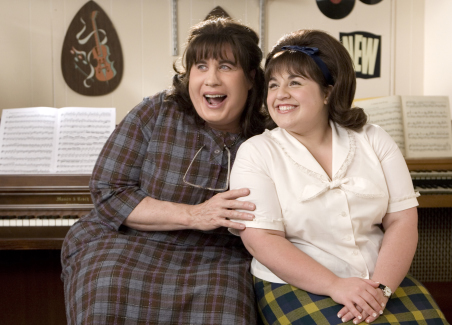 Based on the Broadway Version of the 1988 film; this update offers way more musical numbers and toe-tapping fun that kept me invested almost as much as the cast of characters that I recognize! In 1960s Baltimore, dance-loving teen Tracy Turnblad auditions for a spot on “The Corny Collins Show” and wins. She becomes an overnight celebrity, a trendsetter in dance, fun and fashion. Perhaps her new status as a teen sensation is enough to topple Corny’s reigning dance queen and bring racial integration to the show. The movie has an ensemble cast including John Travolta, Michelle Pfeiffer, Christopher Walken, Amanda Bynes, James Marsden, Queen Latifah, Brittany Snow, Zac Efron, Elijah Kelley, Allison Janney, and Nikki Blonsky in her feature film debut. The movie is an energetic, wholly entertaining musical; a fun Summer movie with plenty of heart. Its contagious songs will make you want to get up and start dancing (I know I did). The movie features popular songs such as “Good Morning Baltimore”, “(The Legend of) Miss Baltimore Crabs”, “I Can Hear the Bells”, “Ladies’ Choice”, “Welcome to the 60’s”,”Run and Tell That”, “Big, Blonde and Beautiful”, “I Know Where I’ve Been”, “Without Love”  and “You Can’t Stop the Beat”. Going back to the original 1988 film, which featured drag queen Divine as Edna and at Hairspray’s Broadway version, which featured Harvey Fierstein as Edna, its understandable straight-man John Travolta was an odd choice for the role, but since he was in “Grease” he fit the bill well. And I always enjoy seeing interacial couples onscreen this time in the form of Amanda Bynes and Elijah Kelley; but I also enjoyed Nikki Blonsky and Zack Efron the real stars of the movie!